I used this info to install Odoo 9, the newest version but then after opening the web, the display is all over the places. Text overlapping and the sections not displayed correctly. So I used this same method and install Odoo 8, which only shown a one-time "JQuery outdated" version warning but doesn't ruin the experience.

What I'm trying to do is:
-Install Odoo 8 (Odoo 9 should be no different) - done
-Use Httpd to serve the web - not yet
-Autostart Odoo 8 after boot - not yet

I'm using this sites for references, which is great help.
https://www.odoo.com/documentation/8.0/setup/install.html
http://www.dvatp.com/tech/odoo_on_freebsd

Take note that this installation is supposed to be for Odoo 9, but after few showstopper, I downloaded Odoo 8 and run on-top of this method, which has no bad effect. Yet.

Install this optional programs, in my system half of it has already been installed.:
graphviz
ghostscript
poppler
antiword
curl
wkhtmltopdf
LibreOffice

Setting up Odoo 8 and PostgreSQL database for it.

Ok, for PostgreSQL, I just create a superuser named "odoo" which will require password.
$ createuser -U postgres -P -s odoo

Then I need to insert password for that new user.

Yes, it's 2 "odoo" folder. Wait for it to finish downloading. After that you can see an "odoo" directory inside. Then go inside that directory.
$ cd odoo

Then I need to use pip to install the dependencies needed for Odoo 8.
$ doas pip install -r requirements.txt

This is when I have problem on psutil which gave "platform openbsd5 not supported" error, that's the reason I installed it above via pkg_add (not sure if odoo will use this other version.)

Then also I got an error about python-ldap cannot be installed. That's also the reason I installed python-ldap using pip manually. So, to make sure that the installation advances, I deleted those 2 requirement from the.. err.. requirement.txt. 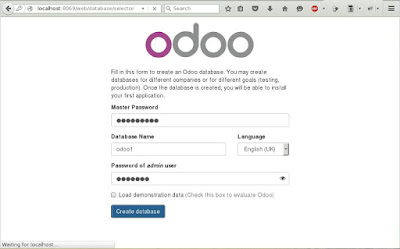 This screenshot is for Odoo 9. For Odoo 8, the page is different but the input required is the same. In Odoo 9, after database creation, my Odoo homepage is chaos. Like I've said earlier, text overlapping, display corruption etc. And then there's 'Could not execute command 'lessc' on the top-left side.  I read that I need to update less and less-plugin-clean-css via npm.

Then I drop the database by using this page:
http://localhost:8069/web/database/manager

Delete the database, then go to the start page to create new. Still the same issue. So then I download Odoo 8.0 branch instead (this method above is for Odoo 8.0 branch).

In Odoo 8, when I open the start page for the first time, there's error about JQuery version being old version, but still can load Database Manager page. After creating database, the page doesn't refresh to load the main page. I need to see the term I run ./openerp-server and see if it's idling. After that I open up the home page. 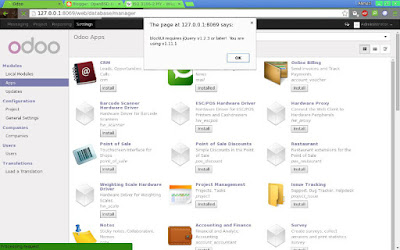 As you can see, there's the warning message. It doesn't cripple the site, AFAIK but I'm looking into this later. Currently I've installed the accounting module and all seems to be working fine.

Update 26/11/2015:
Good news. Odoo 9.0 is working now. The "lessc" issue has been resolved. What I did was update the NodeJs's npm and then less and less-plugin-clean-css

Then I started my Odoo 9. It's working! I'm not sure why the initial npm update above is not working. Anyway, it's good to know that it's working now.

ToDo: Set up httpd for Odoo 8
ToDo: Set up Odoo 8 in rc.d for automatic boot and shutdown.

p/s: I changed the Administrator's profile and when I tried to open back the home page, I was asked to enter email and password. I tried everything and can't log in. But then I didn't try this:

Great news. I've been using this since I updated my snapshot a few days ago now. This is the utility that I've been waiting for!

"xdimmer is a small utility to automatically dim the screen when
no keyboard or mouse input has been detected in the configured
number of seconds, and brighten it once input is detected."

What a great battery saver! So, as I'm using ~/.xsession, I just add this line before the execution of my window manager (cwm, what else!):

So, after 360 seconds of keyboard/mouse inactivity, xdimmer will dim my laptop's monitor to the default percentage (which is 5 percent).

Thanks to the contributor! Later.
at November 12, 2015 No comments:

Updated my lappy to the new snapshots a few days ago and now it's LibreOffice 5 time! Yeah!. Nice OpenBSD, nice.

Hi, It's been quite some time eh. As you can see, I still upgrade my OpenBSD system regularly but currently I do not have the time to ...